For the majority of K+A’s projects, we use reclaimed pine wall studs from Baltimore and Washington row homes more than 100 years old. It’s not just about all the luscious colors and wood grain accents in all their glory; however, it’s also about taking in the history that they bring into our shop and allowing that material to live another life as a beautiful piece of handcrafted furniture. The challenge you face here is getting access to the stories these old wall studs can tell. We are lucky enough to have a wood supplier who has encyclopedic knowledge regarding the history of the homes the wood came out of, the species of wood, and even the mill the wood came out of some hundred and fifty years ago.

As far as our Baltimore wood supply, our stock came out of homes built by Frank Novak (born 1877), who was a carpenter’s apprentice by the time he was 13 and inherited his German mentor August Hanneman’s building company at 22. He went on to be one of the most prolific builders in Baltimore’s history. Famous for building over 7000 row houses in the city, he was called the “Two Story King” for his signature two-story row homes. If you ever pass Kavon Street in the city, it was named in his honor. The story goes that Novak forbade anyone from naming a street after him, but a colleague named Glenn Smithson pulled a fast one by using Kavon, or Novak spelled backwards.

Our most recent batch came from Novak homes built in 1907 and 1908, so they would have been built during the first year of his taking over Hanneman’s company! All of these homes existed on the 900 block of Port Street and 2400 Block of Eager Street. The original inhabitants of the homes were working class, mostly recent immigrants working at shipyards, factories, and trades.

Here’s some images from the demo!

Each house provided over 1200 board feet of material for our use in the shop! We’ve been able to identify a few species of pine such as eastern white pine, longleaf pine, short leaf pine, and loblolly pine. The eastern white was milled and shipped from Pennsylvania and the southern Yellow Pines would have come from North Carolina and Georgia.

Getting reclaimed wood that’s been holding up houses for the past century can give you a mixed bag, which is all part of the fun when choosing this material! No wonder we are constantly amazed by not only the markings from mills, saws, nails, and laths that we get, but just being able to use a variety of species that have their own features and distinctions when we put them together. Check out a great example with our latest coffee table! 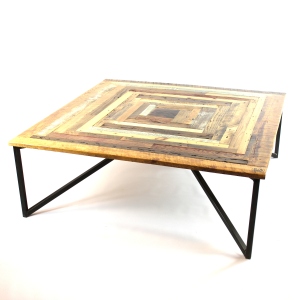 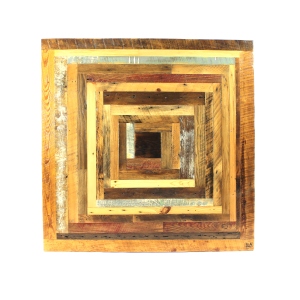